Hi Lina, I hope you’re doing well. Louie (formerly “Stitch”) is doing fabulously! He’s 5.5 months old, at least 32 pounds, and has all his shots. He is a delightful puppy – there isn’t a person who interacts or even walks by without smiling. We love him so much!

You guys have terrific puppies, and I’ve referred several people to you. I met someone the other day whose uncle bought one of your puppies, and they’re equally happy. Thought you might like to see a couple of recent photos of Louie. We’d love to come by and visit sometime, if you’re around. Best regards!

Hi Lina, it’s been a while since I’ve sent you an update on Bailey. He just turned 5 months and he’s 47 pounds of healthy big boy. He just graduated his beginners puppy class. He did well, we’ve been working with him at home (well my husband has more than I have, I just give lots of love and kisses).

Hello Lina. Here is a picture of Saddie, she loves to go bye bye in the car and she loves to stick her head out the window when we go through the drive through of any fast food. She has made our family laugh everyday. I want to thank you for giving us such a blessing.

Hi Lina,Colton is doing great, and growing big! he is becoming a personality and the vet has told us she thinks he has really good breeding and breathing which is rare for may bulldogs… Here is a pic from 2 days ago, he is a handsome dog!!!

Everything is great with her. She is 49 pounds now and full of energy! We keep her active by taking her on walks and playing at the park every day. She has a bulldog friend named Chubby that lives in our neighborhood who she loves to play with. Lola is such a joy to us and we are so happy to have her in our family! Thanks again!!

Hi Lina, Sorry its been so long but we have been busy with moving into our new house. Picasso loves his new driveway and spends his days going up and down it with his skateboard. It gets pretty hot here so sometimes we have to take his board away from him because he won’t stop on his own no matter how hot it gets. Thought you would enjoy a couple pictures from Bruno’s Birthday. 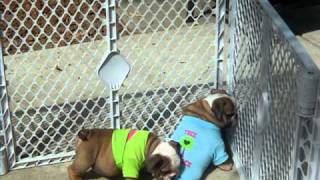